Agra- The City of Love

Home Agra- The City of Love 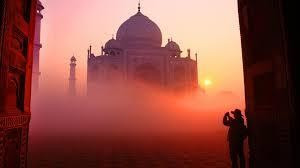 If you’ve ever made a list of architectural wonders you want to experience in you’re life, chances are that the Taj Mahal features pretty high on that list of yours. And rightly so; it is one of the most incredible structures to have ever been built by mankind. And it finds itself in none other than the erstwhile city of Agra – a city that has seen days of glory, wealth, and grandeur – all beautifully captured in the architecture that has become the pride of the city, and India as a whole.

One of India’s biggest claims to fame…

Is the fact that it houses one of the most brilliant pieces of architectural prowess – the Taj Mahal. There is a lot more to the second most populated country on the planet, but today let’s delve deeper into the city of Agra, what makes it one of the most visited cities in the country by tourists, and why you should be booking a trip there right now!

India is a country with an ancient history that spans centuries. The Mughals (a tribe that made its way into India from Central Asia) were one of the most successful empires to have ruled over centuries – and their successes were measured in wealth, architecture, culture, and sciences. With immense wealth and an ever-growing army, they took over several smaller kingdoms and amassed an even greater following and larger kingdoms. But their biggest contributions have always been in the field of architecture, contributions that are standing strong centuries later, and attracting visitors from all over the world.

Agra, a city that now falls within the north Indian state of Uttar Pradesh, was once the capital of the Mughal Empire under its leader Emperor Akbar, and the following Mughal Emperors Jahangir and Shah Jahan. Agra was chosen as an apt capital as it was located on the banks of the Yamuna River, an important element for the functioning of any capital city. The capital city flourished under the rule of all three emperors, and the architecture you see today stands testament to the magnitude of skill, wealth, and progressive thinking of the emperors.

This one deserves every word of praise it receives and some more. Perhaps the most iconic symbols of love to have ever existed, the Taj Mahal is beyond indescribable. Built in the 16th century under the guidance of Emperor Shah Jahan, the Taj Mahal is a monument of love. He commissioned the building of this structure to house the tomb of his wife, Mumtaz Mahal, whom he is believed to have loved dearly. No doubts about that – and no wonder why it is continuously referred to as the greatest monument of love. Today, it houses the tombs of both Mumtaz Mahal and Emperor Shah Jahan. There are many incredible tales of love, longing, loss, mourning, and undeterred devotion that swirl around the Taj Mahal – tales that are best experienced when you visit the Taj Mahal yourself! And along with this, are tales of the construction of this masterpiece – how it was created, how it broke all architectural barriers to become one of the most stunning structures to have ever been created on our planet, tales of sheer architectural genius, and more. Best visited early in the morning, catching the sunrise over the Taj Mahal will turn into one of the best travel moments of your life!

Mehtab Bagh is a beautiful garden that stands opposite the Taj Mahal on the banks of the river Yamuna. Viewing the Taj Mahal from this garden is a great idea as it gives you a different perspective of the structure from across the river.

Another highlight of the city of Agra is the famed Agra Fort. While it doesn’t get as much publicity as the Taj Mahal, it is in no way any less deserving. The Agra Fort served as the capital of the Mughal Empire for hundreds of years. It was previously the capital of the other dynasties before the Mughals took over. Emperor Akbar was the first of the Mughal kings to build parts of the fort. The fort evolved over the years, with progressive emperors adding to the buildings within the fort. What you see today are all original structures that had beginnings in the 13th and 14th centuries onwards. Not all the structures exist today – many were damaged under attacks during various wars.

But what you do get to see today are several buildings of supreme architectural prowess. And such was the quality of architecture that the structures still stand strong and tall. From the Hall of Public Audience or the Diwan-I-Aam to the Hall of Private Audience or Diwan-I-Khas, the royal pavilions, the palace of Emperor Jahangir, a mirror palace, a grape garden, mosques, various entry gates to the fort and more – you’ll need the better parts of an entire day to cover this mighty fort and absorb the history that surrounds you, everywhere you look!

A great way to experience the Agra Fort is attending a ‘Son-et Lumiere’ or a ‘Sound and Light Show’ that plays out every evening once it turns dark. With terrific lighting and a great baritone voice that talks you through the fort and its history, it truly is an amazing experience and a wonderful way of connecting history to the structures you see around you.

This one’s lesser known to visitors, but worth checking out whilst you are in Agra. The Itimad-Ud-Daulah is referred to as Baby Taj as it was inspired by the Taj Mahal but on a much smaller scale. This too is a mausoleum that served as the final resting place for several Mughal royals.

No trip to any Indian city is complete without a visit to a local market. Agra is home to the famous Sadar Bazaar, a huge street shopping area that is known for local favorites like petha, an Indian sweet made from ash gourd, leather goods, and of course, mini replicas of the Taj Mahal!

©2020 MyStead By Mugo Media. All Rights Reserved. Designed By Sociolus