THE ART OF EATING OUT IN BEIJING

Home THE ART OF EATING OUT IN BEIJING 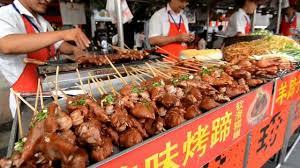 A brief history
China has an ancient history, dictated by various dynasties that came and went, and the cuisines of the land were influenced by each dynasty. Every dynasty that came to power had a cuisine to their credit, and it became the law of the land to prepare meals in accordance with the laws of the dynasty. In later years and more recent times, the region dictated the cuisine. Today, that is how Chinese cuisine is understood. Not as a single term, but each region having a very distinct cuisine of their own. The eight most popular regional cuisines include Shandong, Cantonese, Huaiyang, Sichuan, Hunan, Jiangsu, Zhejiang and Fujian. And each region’s cuisine is literally like the tip of an iceberg, with so many variations, cooking styles and ingredients in each of them, making them even more distinct from one another.

From Beijing, with love
Now to the capital city and its fine culinary offerings. Like everything in China, food is considered no less than an art. And eating out in Beijing is an art in itself, an art that requires you to be educated about, before embarking on a gastronomy tour of the city. Beijing is influenced by cuisines from nearby regions, and largely by the Shandong cuisine, and from a historical perspective, by the Qing Dynasty, with many of its popular dishes originating from the Qing dynasty. Shandong cuisine is also considered the ‘ancient mother of northern cuisine’! If you are experimental, then you’re in the best city, since Beijing has a whole range of local regional cuisines available, in addition to the more popular Shandong cuisine.

Thanks to being the capital, you’ll get to sample food from quite a few different regions as well. The capital has an incredible variety on offer, but since you are in Beijing, it’s a good idea to first enjoy the authentic and local dishes that the city is known for. If there were an official city dish, it would be the Peking Roast Duck. The Peking roast duck is crispy on the outside and juicy on the inside, and you can’t go wrong with this. It’s also known as Beijing Duck so don’t get confused if you see this name on the menu. There is something known as Imperial Cuisine, belonging to the Tan family; its an elaborate meal preparation with complex preparation techniques, fresh ingredients and amazing presentation. Make sure you have a meal just to marvel at the effort that goes into every single aspect of the meal, in addition of course, to it being lip-smacking good! There are a number of restaurants that serve Imperial Cuisine banquets or buffets. It’s pricey…but worth the experience.

Beijing is known for its elaborate street foods, and eating out in this city is one of the best ways to experience Beijing. Its doesn’t get more authentic than this, and while the street food is influenced by different regions and cooking styles, you’re spoilt for choice, and you get to sample different styles of regional food in one city. With more than 200 variations of street food, it’s a task really. From deep fried bread twists called Youtiao to the Chinese-Muslim influenced lamb, chicken, pork and beef kebabs on skewers (Yanrou Chuanr); steamed buns or baos or Baozi are the most common street food, filled with meat, they’re divine! You’ll spot Baozi sellers at street corners, with bamboo steamers piled with heaps of steaming buns. The popular breakfast crepe/ pancake stuffed with sausages, onions or meats, Jian Bing is a local favorite. Do try the Roujiamo, Beijing’s answer to a burger – it’s a pita bun filled with stewed meat, and no two vendors will sell the exact same tasting Roujiamo as they have their own distinct ways to cooking the meat that goes in the bun.
For a more heightened culinary experience where you let the true foodie in you to come out, sample some deep fried insects! Starfish, scorpions and silk worms fried crisp and crunchy – another local favorite.
If you’re not the experimental kind, stick to the more regular stuff that Beijing food is made up of. Succulent dumplings or Jia ozi with a filling of prawn or pork, steamed to perfection and floating in a mild broth, or the more filling Zhajiang noodles topped with minced pork and spring onions.
For quick and easy bites, try bing, a golden colored flatbread stuffed with a whole range of different fillings, sometimes deep fried. If you’re very hungry, settle for some Beijing hotpot, or shuan yangrou – a pot of steaming hot soup that continues to boil and into which you can dip your meats and veggies, noodles and condiments.

It’s an elaborate affair, eating out in Beijing, and it’s a good idea to navigate the world of food with the help of a local. But if you are a true food lover and want an authentic food experience, then hit the streets of Beijing, and you will be a happy soul by the end of the night!