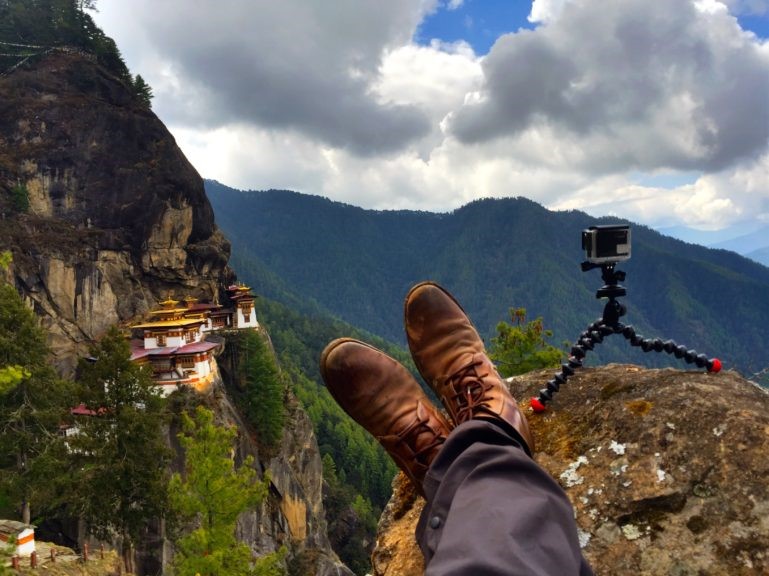 Ever heard of the Taktsang Monastery, known fondly as the Tiger’s Nest? If you haven’t, this should be on your next travel plan. While Bhutan, a little Buddhist kingdom that lies in the lap of the Himalayas, offers unparalleled travel experiences to the adventurous traveler, supreme among them is the trek to Taktsang. On a whole, Bhutan offers great trekking opportunities, but the trek to Taktsang is special for more reasons than one.

Legend has it that Guru Padmasambhava, also known as Guru Rinpoche, who was a master of Buddhism during the 8th century, meditated in a cave for three years, three months, three weeks, three days and three hours, where today stands the Taktsang Monastery. This was also one of the 13 caves in the Himalayan kingdom where the Guru is known to have meditated. Even more interesting was how he got to the cave; it is believed that he flew on the back of a tigress to this spot, hence giving it the other name of ‘Tiger’s Nest’. Thus, he is credited with bringing the religion of Buddhism to Bhutan. Many Buddhist monks and scholars visited the sacred caves in the following centuries, while the monastery was built much later in the 17th century. Today, it has come to be one of the most sacred sites for Buddhists the world over.

The Architecture Of Taktsang

A total of 4 temples and 8 caves make up the entire temple complex of Taktsang. Each temple is connected to the next through a series of really narrow passages, steps and stairways made out of rock. The caves are tucked away behind the temples. Of the 8 caves, 4 are easily accessible. Gold features prominently in this temple complex, with some of the roofs, halls, ceilings and deities being made of gold! Most stunning, of course, is the Hall of a thousand Buddhas carved out of rock, where you will also find a mighty statue of a tiger. At the center of the complex lies a massive prayer wheel that is turned by the monks every morning to begin the day’s prayers. Another noteworthy feature is the prayer hall that houses the statue of Guru Rinpoche. The monastery showcases some stunning Thanghka works that adorn the walls of the complex. Take time to marvel at each architectural element inside the monastery, as each one has specific significance.

Hanging Off A Cliff, Literally

There’s a lot more than an ancient history that Taktsang has to boast of. It’s pristine location, nestled 3120 meters above sea level, and literally clinging to a cliff on the upper side of the Paro Valley, is what makes this monastery really cool! Its location, 10 kilometers to the north of Paro, is stunning. As you begin your ascent up to the monastery, you will be left wondering how it was even possible to build a shrine right at the edge of a cliff. En-route, a mighty waterfall cascading down 60 meters into a sacred pool adds to the beauty of the walk up.

For anyone visiting Bhutan, the trek up to Taktsang Monastery forms the main highlight of the visit, and it is absolutely worth it. Be prepared for a strenuous trek through the mountains, during which you can look forward to waterfalls, small villages, pine forests, breathtaking views and lots of mules on the way.

While trekking is the best way up to the shrine, for those not too keen on making an effort, hop on to a mule. But remember, with narrow trails, you’ll end up spending more time worrying about falling off the mule rather than

taking in your stunning surroundings, so just make that effort and trek up for a more wholesome experience! Stay well hydrated, carry some nuts and energy bars if need be, and enough water to keep you going. The trek can take anywhere between 45 minutes to 2 hours, depending on your speed, energy levels and the number of breaks you take. Remember, towards the end of the trek you have some 700 steps to climb to reach the monastery, so save some energy for that

too. But all in all, the views that surround you fuel your trek. Take short breaks often to re-energize yourself and to check out the views, simultaneously. The fresh air that you breathe, the energy you feel will get you to push harder and make it to the shrine! As you get closer to the shrine, thousands of prayer flags fluttering in the winds, greet you. Look into the crevices of the rocks closer to the shrine that is known to house ashes of the dead. Nothing eerie about it. It’s just simple and beautiful. And of course, once you reach the shrine, you will know how worthwhile the effort was.

Remember! The Buddhist monks are welcoming of all visitors who take time to trek up to the shrine, but certain rules must be followed when you are at the shrine. No photography, phones, shoes or cameras are permitted inside the shrine. Deposit them at the entrance, and collect them once you’ve finished your visit. This is one of the most revered shrines for Buddhists in the world, and visitors are expected to keep the sanctity of the place in mind. Inside the shrine, monks can be seen meditating. Be respectful of all people in prayer or meditation. And don’t forget to take in views of the Himalayan Mountains from the shrine. Capture the sights, sounds and emotions with your mind…it’s an experience you will cherish forever.